Please read the package leaflet carefully before use.

What are the biological functions of Selenium？

Trace elements are essential to humans, and these include selenium, iodine, iron, zinc, fluorine, chromium, copper, manganese, and molybdenum. Although trace elements present in humans are miniscule, their biological functions are impactful. Because of this, they are also known as micronutrients. Amongst them, selenium is incorporated into amino acids and make up the 21st amino acid of the human body, and exerts crucial biological functions in the body through the activity of assorted selenoproteins. Humans have around 25 functional proteins/ enzymes that contain selenium, including one of the most important selenoproteins, the glutathione peroxidase (GPx) family proteins, which are associated with anti-oxidant and anti-inflammation, and are involved in the regulation of immunity and other important biological functions. Selenoproteins help keep redox actions in cells balanced, and protects healthy cells from oxidative damage caused by reactive oxygen species (ROS). In addition, selenium plays an essential role as a co-factor, and is closely related to the synthesis of DNA and proteins. Selenium possess multiple functions in the human body. 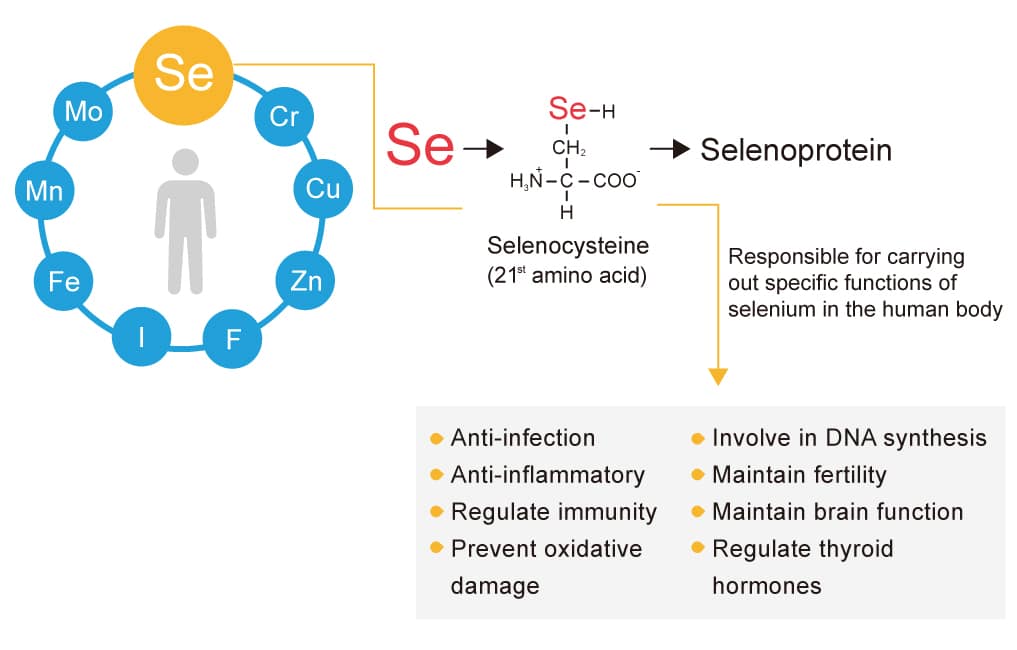 What is Selenium Deficiency？

People who are unable to absorb adequate selenium from food due to insufficient food intake, difficulty eating, critically ill and/or requiring long-term parenteral nutrition (PN) are at risk of selenium deficiency. Deficiency in selenium may in turn worsen existing disease conditions, which may lead to biochemical changes and health risks.

What are the International Guidelines for Selenium supplementation？